The big picture in fintech 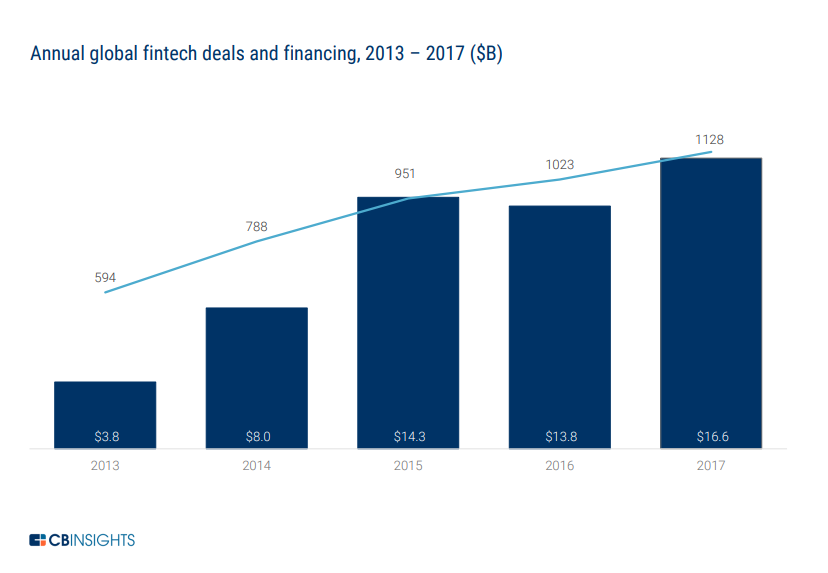 It seems that 2017 was a great year for fintech in general with a record $16.6 billion of VC-backed financing and 1128 deals according to CB Insights "Fintech Trends to Watch in 2018" report.

Considering that the largest deals in 2017 went to companies providing insurance, according to CB Insights, the insurance technology sector was in line with the general fintech growth trend. Over $8 billion dollars were invested since 2012 to date with a 16% year-over-year increase.

Looking at Europe, the growth was even more spectacular: +120% in 2017 compared to the previous year.

Interesting trends for 2018 in fintech emerge, some more easy to anticipate than others. According to CB Insights, European fintechs will expand their global footprint and banks will focus more on partnerships to fight fintech with fintech and to deal with regulatory requests.

They also predict that Wealth management will become the hottest fintech sector in China based on the fact that total individual investable assets in China grew to $26 trillion in 2016 (vs. $17 trillion in 2014) and considering that the retirement crisis will worsen in the coming years. Wealth management is a complex set of service encompassing financial and investment advice, accounting and tax services, life insurance, retirement planning and legal or estate planning.

Also Latin America and Southeast Asia will see strong fintech growth, while CB Insights predictions for insurance tech investments worldwide are gloomier. One thing is certain, 2018 will have Amazon in the spotlight as it starts its ascent in fintech outside of the US. Already it has created Amazon Pay, Amazon Lending ( available only to top Amazon sellers that need additional financing), Amazon Cash and Amazon Reload.

In Europe they are also running the Amazon Protect white label insurance product so stay tuned for its next moves.

While fintech unicorns and recent investment rounds catch the attention of the public on a daily basis, some established software companies, let’s call them pioneers, have been operating in fintech for more a while now.

One such company is Italian-based Objectway which has been ranked #86 in the 2017 IDC FinTech Rankings. Objectway provides financial software and digital solutions for banking, securities, and insurance industries. It operates a digital wealth management platform that provides digital client management, digital investor and advisor portal, digital advisory, and portfolio management services; and investment back office for automated security and advisory services. The company boasts a turnover of more than 60€ million and manages more than one trillion euros of private client assets, having more than 150 clients in 15 countries. Basically this type of company could have been called a fintech in a time when fintech was not a hip word. 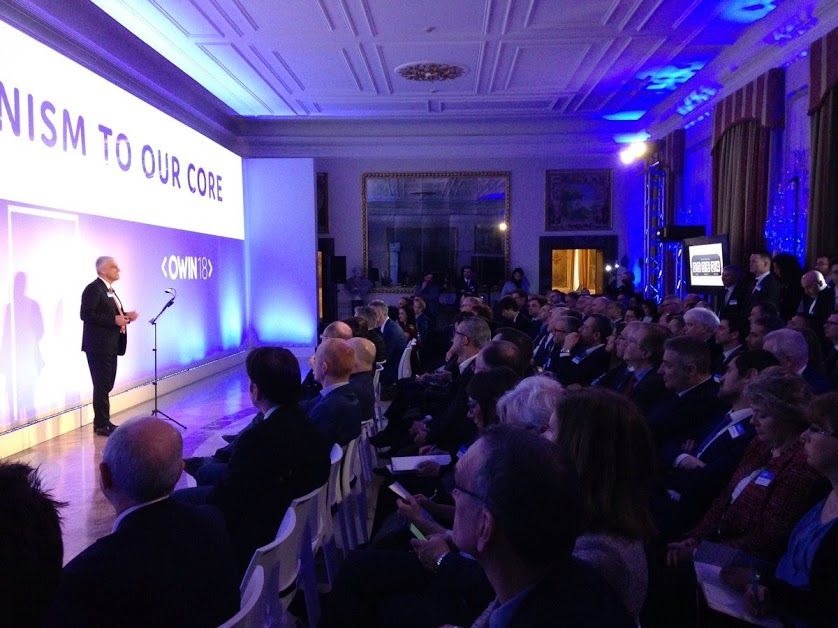 On the 7th of March Objectway held its third international customer conference in Rome (OWIN18) with more than 150 participants coming from the financial industry, including wealth and asset managers, financial advisors, private bankers and fintech thought leaders. The conference was centered around wealth management which, according to Luigi Marciano - CEO and founder of Ojectway, is entering a period of digital renaissance as opposed to an period of “disruption” as many like to call it nowadays: “Are we now in another new era of what everyone calls digital disruption or actually one of digital renaissance?” This was the opening question of Marciano as he was addressing the audience at OWIN18. He continued, “The renaissance of the 14th Century put ‘humans to the core’ and changed forever our way of seeing the world. Now the mass drive and thirst for rapid knowledge, new experiences and interaction between humans and technology provides a tremendous opportunity of a ‘digital renaissance’ to really put ‘digital to the core’”.

Thomas Zink, Associate Research Director at IDC, underlined during his keynote speech how digital resistance is still very much a reality in the European financial sector compared to other regions of the globe with 21% of organizations being labeled as “Digital Resisters”. It seems also that many organizations still get stuck after embarking on a digital innovation journey with retail banking being slightly ahead of game.

“Smart digital is becoming the new reality in wealth management and wealth tech and it is based on smart automation: a combination of cognitive technology, data analytics and machine learning that tries to automate a series of processes.” he added. The impact of this automation is a reduction of costs and time plus a capacity to monitor and learn from customers interactions by mapping them. He continued saying that “AI is now being seen as a key enabler to improve customer engagement and that CRM’s are now being equipped with more analytical power. This means that unstructured data, such as publicly available online sources, has become a great resource to tap into for identifying life cycle and thus for identifying new business opportunities”.

"At OWIN 18 we discussed investment management and how it will be transformed by wealth-tech in the next years. Digital players will grow and will need more ability to scale on large volumes. Incumbent traditional players will need to be able to digitally extend their investment services  to remain leaders" said Alberto Cuccu, Chief Client Solution Officer. He also mentioned that a hybrid approach between robo-advisors and regular advisors is the direction in which both incumbents and fintechs are heading towards in wealth management.

Peter Schramme, Chief Business Development Officer at Objectway, pointed out some determining factors for the future of the banking sector and especially of wealth management saying that “we are currently working in an industry which is highly impacted by digital disruption, but is hardly innovative and is lagging behind other sectors”.  Below you can see the diagram taken from a Deloitte Report “Innovation in Private Banking & Wealth Management” which better illustrates why innovation is highly relevant for Private Banking and Wealth Management right now. 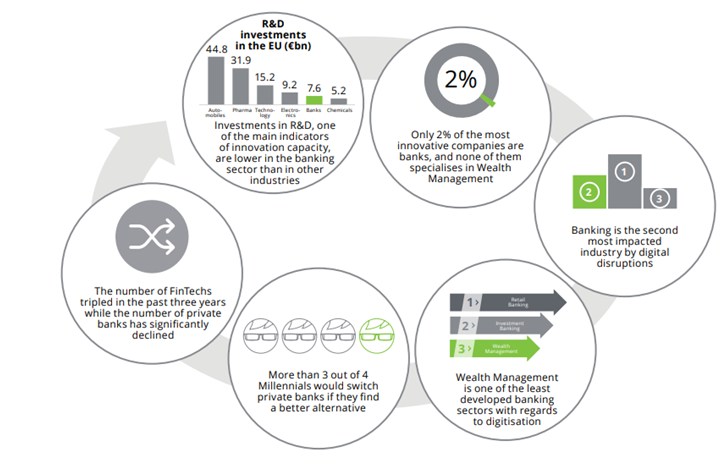 As you can see above, another concern factor seen from the incumbent point of view is that fintech numbers have tripled in Europe in the past three years while the number of private banks has steadily declined. In such a context, a company like Objectway is certainly working towards enabling, through software solutions and services, their clients to adapt and thrive in a new digital and changing reality.

According to Switzerland-based venture capitalist and fintech influencer, Spiros Margaris, “Artificial intelligence will be the big competitive differentiator for most companies in the fintech, Insurtech and financial industries in the coming years, more than any other technology”. Looking even further into the future he described AI not as an advantage that a company might have but more like a basic component of their product or service, just like electricity for our day to day lives”. “It’s a new world and fintechs have a different , more aggressive attitude”, he added, “while it’s only normal for your customers to expect more if the possibilities exists”.

This being said, incumbents are very much aware that improvements in their services are necessary and according to a report by Compeer it emerged that 40% of them feel that digitalization is the way to cover the gap, while some 40% indentified other types of non digital technology improvements as the best solution. Only 20% of respondents referred to growing contact with clients as an option.

So what’s the next big trend in fintech?

The answer, according to Spiros Margaris, sits in getting the mix of different technological and digital solutions right. The threat of tech giants like Amazon, Google, Baidu and so on, is real in the sense that the business models of incumbents and fintechs might suffer changes but it’s not necessarily a bad outcome overall. Spiros talked about how banks, assets management firms and insurance companies will become utilities because they will eventually partner up with the tech giants. And what about free services? There are signs that the industry is opening up to this possibility so he warns that it’s going to be a very competitive world in a not so far away future, based on new revenue models. So, dear financial players, are you ready to embrace this future?

For more details about the OWIN18 event you can read their blog post here.