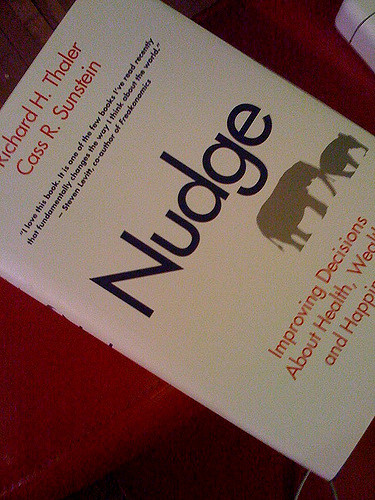 You’re probably familiar with the name of the most recent Nobel laureate in Economic Sciences, Richard H. Thaler. A professor of behavioural science and economics at University of Chicago and now 72 years old, Thaler was awarded the Nobel Memorial Prize in Economic Sciences for his contributions to behavioral economics. His core work is Nudge, a book he co-wrote with Cass R. Sunstein, in which the authors make the case for why nudging people towards certain behaviours that are beneficial for the individuals and for society as a whole, is positive. His work has contributed to the creation of behavioural economics and could have major implications for economic research and policy according to the Nobel committee.

It’s common knowledge that the setting in which people make decisions very often influences the choices they make. What we buy at a the supermarket is influenced by the position of products at eye-level or not; what we choose from the menu often depends on what pictures of food are shown in it. These are the simpler examples but implications extend to how a person or family relates to healthcare, insurance, savings strategy and so on. According to Thaler and Sunstein, even “small and apparently insignificant details can have major impacts on people’s behavior” so whoever presents choices must frame them in some way and the framing will affect the decision making.

The nudge approach has already been tested in different contexts, one of which is the United Kingdom (UK) government’s 2012 policy of auto-enrollment for private pensions. It is a great example of how a nudge policy can have benefits – it led to considerably higher private-sector, pension-saving participation – because individuals can opt out but are otherwise considered enrolLed.

An example which is closer to the industry of our interest refers to a global insurer that has built on one of behavioral economics’ most powerful insights: “Losses loom larger than gains.” Starting from this premises, the insurer created over 20 nudges and tested them on a large scale—in over 7,500 cases of breakdown assistance. One such case was put in place with the help of insurer’s service representatives that described the partner repair shops as “the natural, default choice, framing the benefits as something that would be lost if the customer went elsewhere—a subtle shift away from merely listing the advantages of choosing a partner repair shop.”

The unexplored potential of Microinsurance

With particular focus on the smartphone — the main proxy of today’s customer Insurtech has introduced the concept of Microinsurance: insurance policies of limited duration and contained costs available directly on the client’s smartphone with no paperwork. Currently, Microinsurance covers around 135 million people, which represents about 5% of the entire market potential, with an average 10% annual growth rate. The risks covered by such solutions are the typical ones of the traditional insurance market: life, health, accidental death and disability, and property insurance.

Developing countries have economies that are generally based on farming and agriculture, so they can not manage to cover all the needs of a growing population exclusively with the goods they produce. This means that approximately 70% of the world’s seven billion people live in poverty which makes the case for a high demand for certain insurance products like health and life, agricultural, and property insurance, even catastrophe covers. An estimation of the the potential market for insurance in developing countries is between 1.5 billion and three billion policies.

Microfinance and Microcredit, believed to have been originated at the Grameen Bank founded in Bangladesh in 1983, are commonly associated with the more poor, developing countries and by association so is Microinsurance – nevertheless the latter has a different kind of business potential. Microinsurance is not just a short time insurance coverage at reduced cost for people in developing countries. It is an innovative way of selling insurance that is aligned with customer expectations while covering a specific need, at the right moment, at the right price, in a customer-centric approach – or so it should become. This type of insurance could help close the protection gap, both in developed countries and developing ones.

The role of Microfinance, in contrast, is to create “a world in which as many poor and near-poor house-holds as possible have permanent access to an appropriate range of high-quality financial services, including not just credit but also savings, insurance, and fund transfers.” Microcredit on the other hand means providing credit services to those with low income. It is an extension of very small loans to impoverished borrowers who typically lack collateral, steady employment, and a verifiable credit history.

Provided that people who live on a low income are offered the right service, means, and knowledge, they will become effective consumers of financial services. The MicroInsurance Centre estimates that in the next 10 years or so, the Microinsurance market could grow to one billion policy-holders, representing a third of the potential projected 3 billion market. It is key not to take insurance demand for granted.

Bringing the benefits of insurance

Insurance often has a negative connotation in the developing world, which stops it from reaching more people. The market needs an innovative approach based on customer education and incentives. The advantages of having an insurance cover has to be clear in the minds of potential customers and, for that to be achieved, trust and information are very important. There are several mediums which can help in accomplishing this task: like agents on the field, TV and radio program plot lines, or even through literacy campaigns. To create demand, other types of incentives can also be used, including tax exemptions, subsidies, or compulsory cover. For Microinsurance to function in a developing country the products and the processes to be put in place must be simple and the premiums need to be kept low. This can only be achieved if incumbents change their mindset and implement an efficient administrative strategy combined with the right distribution channels.

Insurers will have to find the right business model and partners when approaching such markets, and should consider less common mechanisms for controlling moral hazards, adverse selection, and fraud. For example, proxy underwriting, group policies, and waiting periods mitigate adverse selection. At first, investing in microinsurance might seem a bit reckless, but the returns are gradual over time: starting with reputational gains in the short term, knowledge in the medium term, and growth in the long term.

Already more than half of the world’s population uses a mobile phone, and 34% of the total population are active mobile social users with a 50% penetration regarding Internet usage worldwide. Fewer and fewer people use fixed telephone lines as mobile phones are the dominant means of communication, even in the Third World. According to a Pew Research Center survey, in the last two years there has been a significant increase in the number of people from developing nations that declare they use Internet and own a smartphone.

Moreover, in nearly every country, Millennials (those aged between 18 and 34) are much more likely to be Internet and smartphone users than those over 35 years of age. This phenomenon is characteristic of both advanced and emerging economies. Despite these trends, fewer than 5% of people with low income have access to insurance or to covers that they need. These qualities make underdeveloped countries an ideal market for the insurance industry to explore because they present some great opportunities. But as stated above, it is not just applicable in developing countries. On the contrary it could be even more successful in developed economies where people have even higher access to information, smartphones and internet.

This takes us to Microinsurance and what it has in common with the nudge theory. Insurance should adapt to the customers’ habits and their environment so we believe the best way to do that is by selling Microinsurance that has a short duration with a push approach. It’s called a push approach because the insurance seeks the client out and not vice-versa. This could be interpreted as a gentle nudge that arrives exactly when the client needs it, directly on his or her smartphone, offering protection against an immediate and perceivable potential risk. Machine learning and Artificial Intelligence (AI) have evolved to such a degree as to allow a detailed profiling of the potential customer and its context.

As Thaler suggests in his book, the context makes everything and helps conclude the sale or not. So by interpreting the variables that could influence the customer, a good AI-based solution should be able to capture the precise means and moments to deliver short period insurance offers to truly interested users. The trick is to avoid annoying customers with offers that do not interest them directly, in the wrong moment. The answer is an AI-based solution which can correctly interpret different types of data coming from the customer (through use of apps, of the smartphone, of wearable devices connected to the smartphone and so on).

Why ‘nudge’ people towards Microinsurance?

Why is it so important to nudge potential clients into buying Microinsurance coverage? Consider a common statement regarding the industry that has proven true over decades: “Insurance purchase is not exciting; insurance is sold not bought!”. That is precisely why need has to be stimulated and in the current context, which has dramatically changed with the arrival of smartphone technology, this is even more important. The key to selling insurance to millennials and the whole “connected generation” is to reach them with the right message, at the right time, on a device where they swipe, tap, and pinch 2,617 times a day: their smartphone. Companies should get customers’ attention by using the same channels that they use and talk to them in their “language”.

Empowered by technology, members of this generation search out authentic services that they utilise across platforms and screens, whenever and wherever they can. This might just be the perfect moment to develop solutions that are able to nudge people into behaviours that can benefit themselves, offering short term coverage for atypical situations that would otherwise remain uncovered. A good step towards closing the protection gap – if you look at it from an insurer’s perspective.