Insurtech: The Elephant in the Room 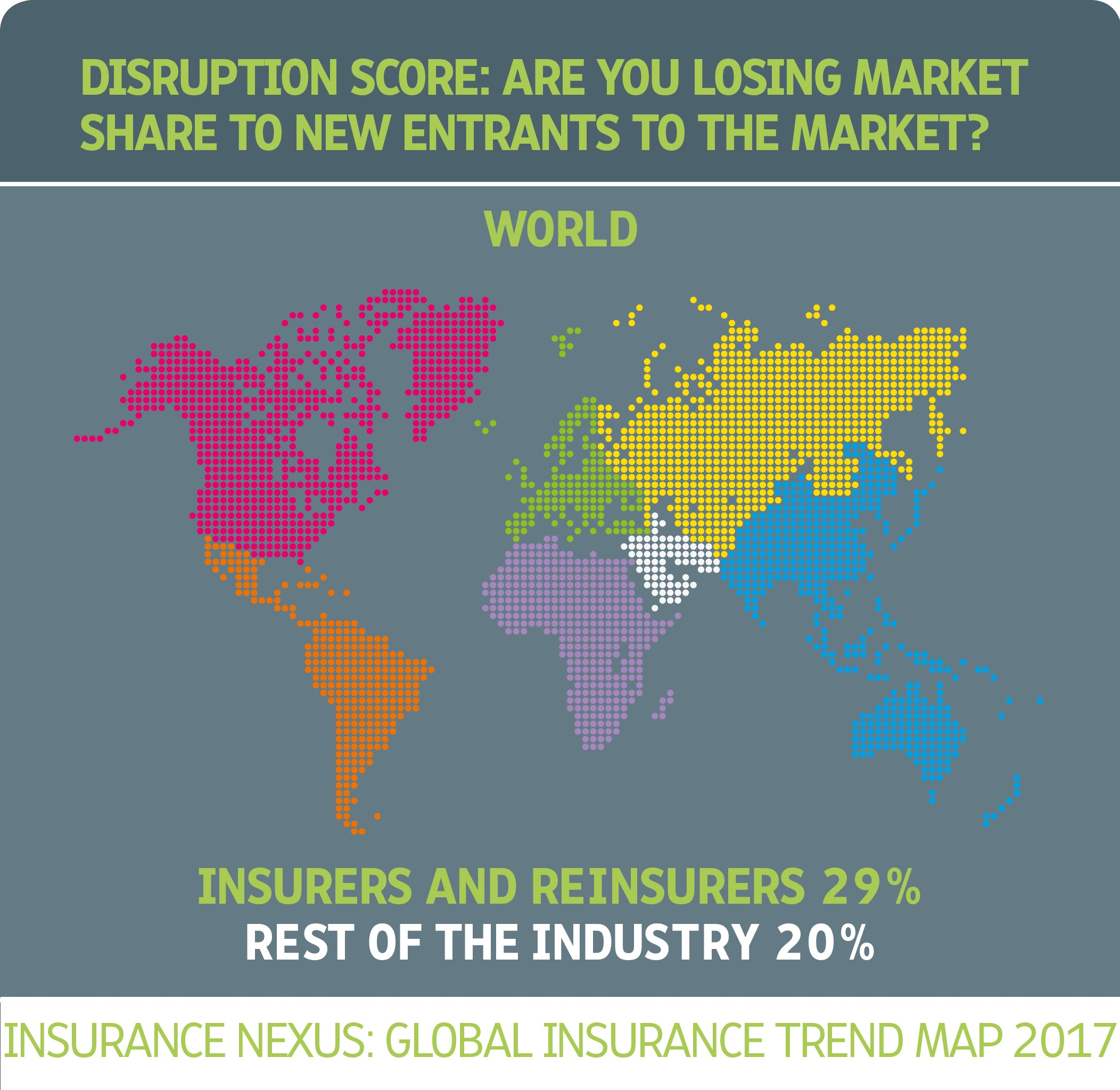 Following on from our last post, Insurance Nexus Global Trend Map #1: Industry Challenges, it is now time to address the Elephant in the Room. Speak to any insurance industry pundit and they will tell of an impending shake-up, of the sudden obsolescence of traditional carriers in the face of leaner, nimbler competitors and 'disruptors' under the banner of Insurtech... So it is interesting to step back a moment and examine the material impacts currently being felt by today's insurers – is 'disruption' all it's cracked up to be?

As part of our Trend Map, we conducted an extensive international survey (over 1000 responses) and consulted 50+ industry thought-leaders; you can find a breakdown of our survey respondents, details of our methodology and bios of our contributors by downloading the full Trend Map here. Along the way, we asked our insurer respondents whether or not they were losing market share to new entrants (giving us a 'disruption score').

Different markets mature at different rates, with our 'disruption score' falling to 23% and 25% in Europe and North America respectively but rising to 47% in Asia-Pacific...

The impact of new entrants is therefore greatest – or at least is perceived to be greatest – in the East. This is not a wholly surprising result given that the overall market in this area is expanding so fast, due to the rapidly emerging middle class (especially in places like China and India) as well as large uninsured populations coming into focus at the lower end of the market. An expanding market creates more opportunities for new companies, and existing companies must grow at a high rate just to maintain their existing share.

In addition to this, there may be a psychological factor driving up the percentage of respondents indicating market-share loss in Asia-Pacific. People may perceive the threat from new entrants more keenly here than elsewhere, even if they are not currently losing real market share. In saturated markets, the risk of total disruption is less because traditional insurance is established as the solution to a certain set of problems. In underpenetrated Asia-Pacific however, many people have never had insurance in their lives and do not therefore owe any kind of allegiance to established insurance forms. This means that traditional insurance models appear particularly ripe for circumvention by non-traditional players.

"Successful innovations must be closely coordinated with the company's strategy. They require an innovation process and involvement from all areas of the company. On the one hand, it is important to constantly improve existing products and services. On the other hand, it is essential to think outside-of-the-box: Artificial intelligence, augmented-reality applications and buying a Fintech company are examples which fall into this category."

Just because the European and North American markets produced lower 'disruption scores' does not mean that the waters here are clear; we need look no further than the fact that more than half of 2016’s Insurtech deals took place in the USA to see that the situation is much more complex.

We should bear in mind the psychological factor and the hype cycle, whereby technology impacts are often overestimated at first: the wave is always biggest when it breaks but may leave little behind it other than foam. Later, in our Regional Profiles, we loosely apply this wave model to our three key regions, drawing on stats from our Key Themes section and input from local commentators; in North America the ‘disruption wave’ is still rising, in Asia-Pacific it is breaking and in Europe it has broken ...

In this sense, these scores are perhaps more revealing as indicators of each market’s ‘maturity’ than of the overall extent of disruption; while newcomers will continue to take market share for the foreseeable future, carriers’ assessment of this threat may, paradoxically, adjust down, as they take on board a ‘new normal’.

"The common denominator that’s sweeping the industry right now is this whole wave of Insurtech. It applies to anybody and anywhere in the world."

This new normal will by no means be totally inimical to today’s insurers; while some Insurtechs do have incumbents in their cross-hairs, many new start-ups will simply end up replacing the more tired parts of insurers’ stacks with something better. And once the gloss has worn off, many Insurtechs’ currently belligerent stance may well soften into something more cooperative, particularly given the mutual benefits that could come from newcomers and incumbents working together, in a marriage of scale and innovation. We further explore Insurer-Insurtech collaborative models in our Regional Profiles, which you can access by downloading the full Trend Map here.

'Disruption' is not just an issue for carriers but affects every player in the insurance ecosystem and every category of insurance work. The balance of industry chatter would suggest that brokers and agencies will be the first part of the insurance value chain to feel the pinch, for example through disintermediation by new direct plays and robo-advice.

Interestingly, the Rest of the Industry (everyone apart from carriers) achieves a 'disruption score' of 20%, lower than the 29% we registered for carriers, and this trend is consistent across our three key regions (see above). Again, this may reveal more about sector maturity than material realities; the fact that indirect channels have for a while been an obvious target – not just for Insurtechs but for incumbents’ own direct offerings – could mean agents and brokers have come to perceive the threat more realistically than carriers, who may currently be in peak panic mode.

Before we move on to our next post, on Insurer Priorities, let’s quickly review the state of Insurtech at present. According to data from CB Insights, total Insurtech investment in 2016 totalled $1.7 billion, around double what it had been in 2014. This compares to the $17.4 billion invested in Fintech overall in 2016 (according to data from PitchBook). Insurtech has been slightly longer coming than tech disruption in other branches of financial services, but its role in insurance – a data industry par excellence – could be even more transformative yet.

According to a recent report from Accenture (The Rise of Insurtech), approximately half of Insurtech investment money is being funnelled towards Artificial Intelligence (AI) and IoT. Currently, personal lines are generating more activity than commercial lines, and Life is the quietest of the major branches; this picture is broadly borne out by our more general stats across the Trend Map. This may be a case of people going after the lowest-hanging fruit first rather than anything inherent in these lines – there remain manifold untapped opportunities here, from realising backroom efficiencies to innovation out in the field (especially anything IoT-related for Commercial insurance).

So we looked at carrier sentiment towards 'disruption' both globally and in a range of local markets (Europe, North America and Asia-Pacific). We found significant, though not overwhelming, impacts reported from new market entrants, while at the same time acknowledging that psychology may play a substantial role in carriers' self-assessments.

In this context, it will be interesting to see what sorts of priorities insurers are setting – whether their money is where their mouth is, so to speak. As part of our extensive Trend Map survey, we drew up a shortlist of fifteen priority areas and asked our carrier respondents to rank them from a money, time, staff and training perspective (results below, both globally and segmented on three key regions). You can find a breakdown of our 1000+ survey respondents, details of our methodology and bios of our contributors by downloading the full Trend Map here.

Digital Innovation tops the list internationally as well as in North America, Asia-Pacific and Europe. This result (Digital Innovation as respondents’ key priority, with Customer Centricity not far behind) complements what we saw in our earlier post on Industry Challenges, where 'Technological advancement' and 'Changing customer expectations' were perceived as the key external challenges in the industry. Digital Innovation and Customer Centricity also represent much of the ground fought on by Insurtech – and upon which incumbents must fight too. Investment Management is the lowest-ranked priority across the board, most likely a reflection of enduring low interest rates.

"The highest single priority for insurers – Digital Innovation – is a direct reflection that this is the widest capability gap between insurers’ expertise and what are now marketing 'table stakes'. Time is not on the side of those who fail to close this gap."

Looking at specific technologies attracting buzz, Analytics emerges as top-three priority across the board, while Internet of Things (IoT) struggles to break into the top ten. This is not to deny the importance of IoT for the industry over the years to come, but it does suggest that there are more immediate gains to be realised on the analytics side; ultimately, these two technology areas complement each other perfectly. We further explore Analytics (including Artificial Intelligence!) and IoT in our Key Themes section, which you can access straight away by downloading the full Trend Map here.

While Blockchain did not feature in this year's shortlist of insurer priorities, we do still cover it among our Key Themes, in our sub-section on Fraud.

In order to deepen our comparison of the different regions in the table above (North America, Asia-Pacific and Europe), we also created a ‘medals table’ drawing attention to the differing levels of emphasis placed on our 15 priorities from one region to the next. For instance, Asia-Pacific achieved the highest priority score (60) for Digital Innovation and has therefore been credited with the Digital Innovation Medal on the medals table below ...

Some key takeaways from our regional comparison...

"Even though different markets seem to focus on a variety of distinct priorities, it’s clear many insurers place the customer at the heart of their strategies, whether through analytics, digital processes, mobile-first platforms or enhanced distribution capabilities. In each situation, technology is at the core of such digital innovation. Culture and mind-set may be the two elements that slow success."

Find out more about how our key priority areas vary by geography in our Regional Profiles, by downloading the full Trend Map here.

Survey respondents had the opportunity to provide any additional priorities they felt we had missed. Stand-out entries included:

Certainly the top three of these we could categorise as staples of any digital transformation initiative. In our next post Insurance Nexus Global Trend Map #4: Services, Investments & Job Roles, we take our exploration of insurer priorities one step further.

The original articles were published by Alexander Cherry at this link.

For any inquiries relating to the Insurance Nexus Global Trend Map, this on-going content series or next year's edition, please contact: 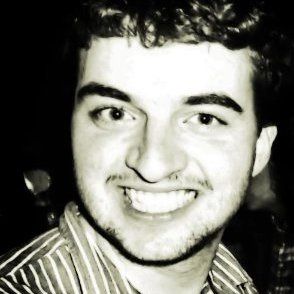