If a business isn’t equipped to embrace the changes that are beginning to take hold in the insurance industry, that business is sure to soon find itself behind a quickly moving curve. The strategies that worked yesterday might still work today, but tomorrow they may well be obsolete. It’s time to move on to a new way of thinking - one that relies on data and technology to do the heavy lifting that was once left to manual intervention.

The end result? Improved efficiency. Faster claim processing. A more immersive and comprehensive customer experience than ever before. But none of it comes without first incorporating the technology of tomorrow.

As a thought leader in the rapidly changing insurance industry, Insurance Nexus, brought to you by Reuters Events, prides itself on being at the forefront of emerging trends and technological innovation. The annual Insurance Nexus AI and Analytics USA Summit conference plays host to an engrossing and all-encompassing summary of the future of the insurance industry. This one-stop-shop for industry information includes presentations and roundtable discussions from some of the best and brightest minds in the field. In advance of their next summit, key insights of this group have been compiled in an infographic, so that all interested parties might get a head start on embracing the technology that will define insurance operations in the future.

This incorporation of technology isn’t just something that’s going to happen down the road. In many cases, it’s happening right now. In a recent Insurance Nexus survey of 300 insurance executives, half of the respondents stated that they’re already seeing technology like machine learning and artificial intelligence having a noticeable impact on their daily roles. Furthermore, an additional 40 percent of executives believe they’ll start to see an impact in the next two years.

You can find insights like these in our exclusive Insurance Nexus infographic, which can be found here.

In other words, a company that puts off investing in new technology not only delays the inevitable, but they also put themselves at a major competitive disadvantage. If ninety percent of the competition has already begun the process of embracing paradigm-shifting technology, businesses that lag behind face a major challenge in catching up to the leading organizations in their field. A forward-thinking business at least owes it to itself to learn about what’s out there, specifically, the options available to the business that may help to significantly improve operations. 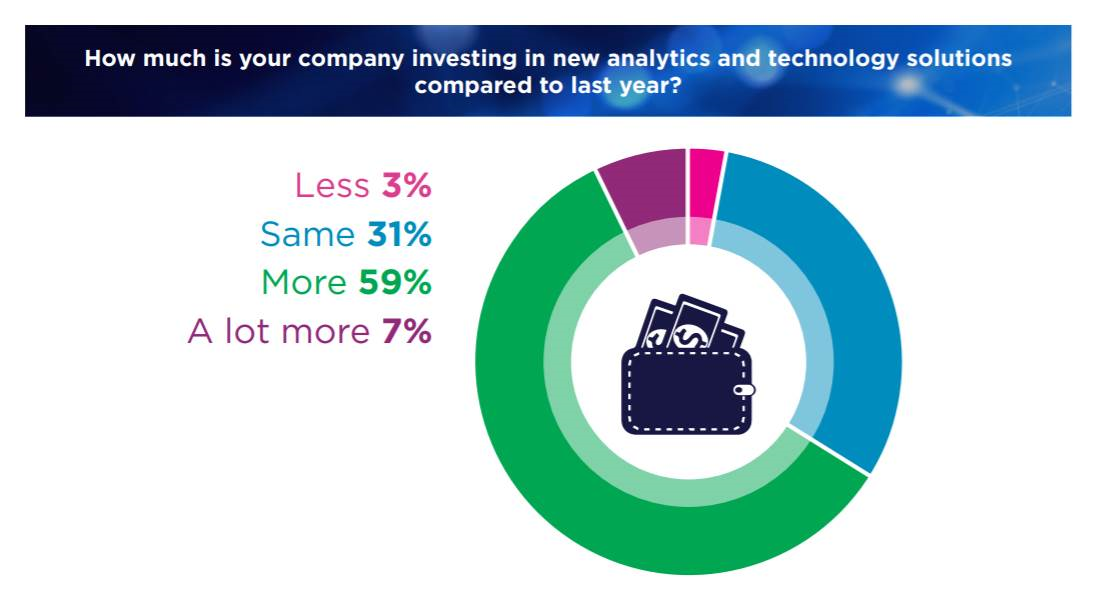 One particularly interesting fact derived from the Insurance Nexus study is that an insurance company doesn’t necessarily have to pour large sums of money into this innovative wave of technology to see results. In fact, approximately half of the executives surveyed stated that they’ve invested less than a million dollars into new technology. What does this mean? For an insurance company that’s just learning about the technological means available to them, the prospect of catching up to industry leaders might not be as daunting as once feared. Only 14 percent of insurance executives surveyed are investing more than $5 million into this technology. There’s plenty of room, and plenty of time, for a smart business to learn about the benefits of these technological innovations and how they can be incorporated into daily operations.

More facts and figures relating to technological implementation can be found in our Insurance Nexus white paper.

We’ve talked a lot about how technology is emerging and starting to become commonplace in the insurance industry. But how do these new innovations actually correspond to increased efficiency on a daily basis?

One surveyed executive has this to say about the marriage of technology and insurance: “Insurance has the most to gain from innovative technology. It has had profound impact on our growth prospects and operating margins.” Given the enthusiasm with which insurance businesses have adopted emerging technological trends, it’s clear that many in the industry share this opinion.

Artificial intelligence has been on the rise for some time, but it’s only recently become evident how it can benefit an insurance company. Consider the future of auto insurance claims. Today, the process requires phone calls, inspections and a lengthy review process. An AI-assisted future could potentially remove many of the barriers between an accident and a processed claim. For example, real-time data from cars could be used to assess the extent of the damage, preventing the possibility of inconsistency from claim adjusters.

The above example is one that might not be realized for years. But it provides a glimpse at how technology can completely transform an industry that has worked differently for decades.

In other ways, technological developments have already disrupted old ways of thinking. Innovations such as automation and predictive analytics have given insurance companies tremendous insights into their customers, the likes of which have never been seen. Insurances now know more than ever what to expect from insurance consumers, helping to streamline internal operations, enhance planning for the future and better understand the types of scenarios in which a given customer might find himself or herself.

An Insurance Nexus survey respondent put it best - “Data has been at the core of the insurance industry for decades. It’s time for us to use data to drive predictive insights with AI, save time with automation, and generate opportunities for the company by harnessing technology that’s never been more accessible.” These words ring true, and it’s up to interested insurance companies to take the first step. They can do this by downloading the Insurance Nexus infographic that neatly summarizes the technological developments that are beginning to bubble to the surface. This infographic contains additional insights derived from the Insurance Nexus survey of 300 insurance executives; it also provides a brief overview of how technological innovations are already helping insurances to revamp their operations. To download the infographic, click here.