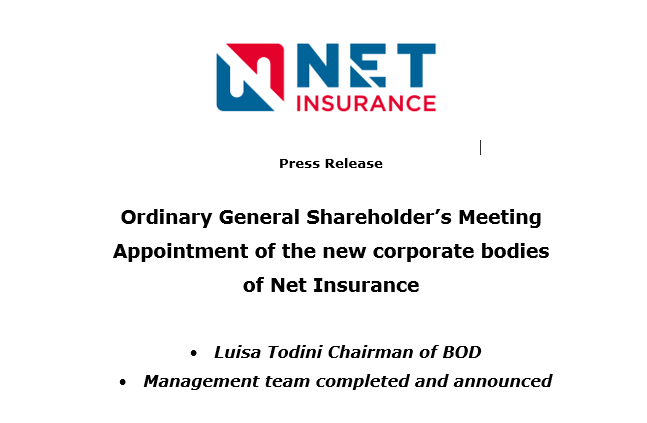 Rome, January 21st 2019 – Today the Shareholders’ meeting of Net Insurance S.p.A took place, under the chairmanship of Renato Giulio Amato, and – following the agenda of the day – the new components of the corporate bodies were nominated.

Nominee of the Board of Directors

The Shareholder’s meeting has deliberated, for the 2019-2021 triennium, the nominees of the new Board of Directors, according to the slate voting system, foregone from the bylaws.

Net Insurance’s new Board of Directors is therefore composed by n. 9 members:

Nominee of the Board of Statutory Auditors

The Shareholder’s meeting has deliberated, for the 2019-2021 triennium, the nominee of the new Board of Statuary Auditors, according to the slate voting system.

The resolution concerning the nominee of the new Board of Statuary Auditors has found 68,68% favorable votes within those having the right (net of own stakes).

The new body of control of the company is therefore formed by:

At the end of the Shareholders’ meeting, the Board of Directors gathered to appoint the necessary nominees. In particular, the Board of Directors, after an evaluation of professionality, integrity and independence, required qualifications from the law, for all of its components, attributed within its members the following titles and nominated Luisa Todini President and Andrea Battista Chief Executive Officer.

The new Chairman Luisa Todini, together with the new Board, have greatly thanked Renato Giulio Amato and the previous board for the work performed during the previous term.

The Board also deliberated the composition of other committees so organized:

And finally deliberated for the composition of the Innovation Advisory Board, which will be guided by Matteo Carbone and will support the management and the Board during the fundamental journey of innovation related to new technologies and the world of InsurTech.

The Board of Directors furthermore:

A summary of all the curricula of the members of the Board of Directors, of the President of the Board of Statutory, of the effective Mayors in charge and of the management is published on the company’s website, under the section Investor Relations.

“I am very honored to have been appointed as Net Insurance’s Chairman, a company which has its roots in a successful path and which, with an innovative industrial plan, looks into the future by offering cutting-edge products for a 'tailor-made' market," said Luisa Todini, new president of Net Insurance. "The Board that I will preside over, represents the best of professionals in the sector and not only, under the operational guidance of Andrea Battista, managers with experience and consolidated successes as demonstrated by the many investors who believed in the project", continued Todini. "From my part, I assure human and professional commitment in order to contribute to an effective, balanced and shared governance of the Company considering the interests of all shareholders". "With an assembly that was highly attended by the Stakeholders, the exciting ride that began on the 21st of February last year, with the launch of the project Archimede, was completed. I have the pleasure and honor to have built a competent, strong and cohesive team, a team with a high degree of diversity in terms of experience, skills and gender ", commented the CEO Andrea Battista, at the end of the company meeting. "The Board, this team and all the people who work in Net every day, will surely be the winning cards for achieving the challenging objectives that await us". "A heartfelt thanks goes to Luisa Todini, from today our Chairman, for having accepted this position with great passion; to all - concluded Battista - I wish a great work ".

Net Insurance is an insurance company whose aim is to offer protection plans dedicated to the individual Person, Family and small-medium enterprises.

It’s history, financial stability, it’s agility and the offer of innovative products and approaches make Net Insurance unique in the Italian Insurance sector. A company in constant evolution with an eye toward the future.

The alphanumeric code for the stakes is “NET”. The ISIN code for the Ordinary Stakes of Net Insurance S.p.A. is IT0003324024.