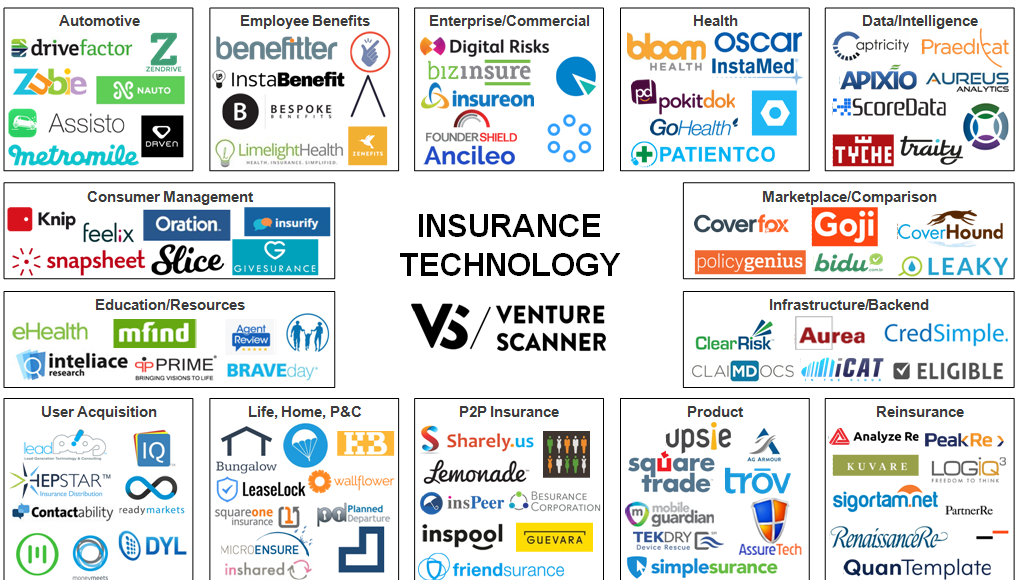 With the help of Venture Scanner data, InsurTechNews is now able to offer you a quarterly update on the state of the InsurTech sector. The purpose is to capture changes as they happen regarding startups and the types and amount of funding that they receive.

From April through June 2017 there were $655 million of investments, 50% more than the previous quarter (January through March) when insurtech startups raised $417 million.

The three insurtech categories with the highest amount of investments so far are: Health and Travel with $9.6B; Life, Home & P&C with $7.01B and Automotive with $6.77B.[2] The major concentration of startups can be seen in Comparison/Marketplace (368) and Infrastructure/Backend (274), while the lowest number of startups are in P2P (29) and Reinsurance (33). The reason for which P2P insurance category has still a low number of insurtech startups and reduced funding is because it’s a relatively new area that has only recently started to be explored by the industry, whereas the Reinsurance category is at the opposite pole, currently heavily funded and with many years of activity behind.

Source: InsurTechNews elaboration of Venture Scanner data (rounded off) as of July 2017

Venture Scanner is currently tracking over 1300 insurtech startups globally with $19B in funding as of July 2017, with a major concentration in the US followed by Europe, Asia and Australia.

There have been 42 insurtech funding events from April 2017 through June 2017, compared to 41 in the previous quarter (January 2017 through March 2017). This shows that the market is constantly moving forward and the trend of Seed and Series A investments as a majority is confirmed even for this 3rd quarter of 2017.

Insurtech startups raised $655 million from April 2017 through June 2017 with Bright Health scoring the highest amount of funding – $160 million. The Minnesota-based health insurance startup has raised a total of $240 million to date and this latest increase saw Greenspring Associates lead the investment together with Greycroft Partners, Redpoint Ventures, Cross Creek Advisors and other other existing investor names. Bright Health proposes “affordable and higher quality healthcare to individuals and their families” through the company’s Care Partnership, according to Bob Sheehy - co-founder and CEO. Their model uses health systems economic rewards for practicing efficient, high-quality healthcare and creates exclusive partnerships with a single health system in each market to support the relationship between patients and providers.

Coming up next is Clover Health with $130 million raised in the month of May 2017. Founded in San Francisco, this insurance startup has the objective of making insurance more affordable for consumers and easier for physicians to administer. Their technology is able to identify the most at-risk patients and guide them towards a healthier lifestyle. Take for example patients who fail to follow the schedule when it comes to their prescriptions, or patients who are unable to adequately manage their chronic disease. In this case nurses could pay a visit to the patient’s home in order to do the necessary tests and as a consequence reduce the rate of hospitalization.

Singapore Life is a fully licensed direct life insurer, one of the only ones without foreign partners to be licensed by the Monetary Authority of Singapore since 1970. After $50 million Series A round in April, the company plans to launch in the following months (through its online platform) life insurance plans like term insurance and critical illness.

Trōv, the on-demand insurance platform for objects founded in 2012, has raised some 45 million in a Series D round, reaching a total funding up to date of $87.8 million. Trov allows users to insure whatever they want, whenever they want to in a couple of simple steps, all managed from the user’s smartphone.

Among this quarter’s notable insurtech funding events, Insurance Next gets the 5th position with a Series A  $35 million round and some $48 million total raised from the beginning of 2016.

There have been 9 insurtech exits from April 2017 through June 2017, all of which have been acquisitions. The insurtech startup Knip, headquartered in Zurich and founded in 2013, was acquired last month by Digital Insurance Group for an undisclosed amount. Knip offers an innovative mobile insurance manager that makes it easy for users to buy, track and manage insurance policies, premiums, and benefits. The startup and Netherlands-based comparison-software provider Komparu (also acquired by Digital Insurance Group in June), have completed a merger that aims to transform the new parent company in a leading European digital insurance platform.