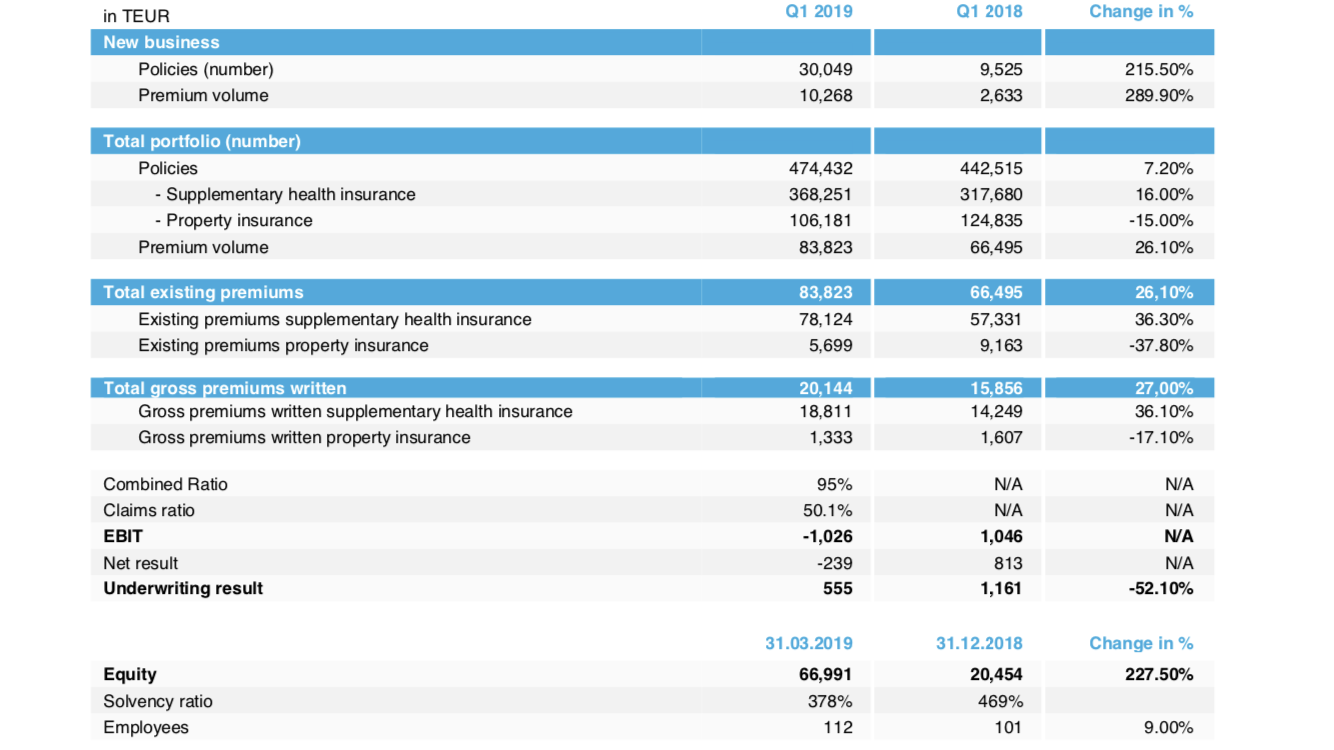 Frankfurt/Main, 23 May 2019 – DFV Deutsche Familienversicherung AG (“DFV”, “Deutsche Familienversicherung”), a strongly growing and Europe-leading Insurtech company, continued its dynamic growth in the first quarter of 2019. With 30,049 contracts written, the company tripled its volume of new business year-on-year (Q1 2018: 9,525 new contracts), already achieving over 30% of the 100,000 new contracts on the books planned for the year as a whole. The corresponding existing premium volume of the portfolio increased by 26.1% to EUR 83.8 million (Q1 2018: EUR 66.5 million). In the supplementary health insurance segment, 29,045 new contracts were added in the first quarter – equivalent to a 231% increase year-on-year. Newly concluded property insurance policies went up by 33.0% in the period under review.

“We began the new year with an impressive acceleration in growth of new business thanks to our successful distribution activities and the continual improvement of our digital platform. We plan to continue increasing our investments in attractive product segments this year and to consistently pursue our growth track,” said Dr Stefan Knoll, CEO and founder of DFV.

Existing premiums in supplementary health insurance segment up by 36.3%

Portfolio growth in core business of 5.9%

The solvency ratio of Deutsche Familienversicherung amounted to 378% at the end of the first quarter.

Since 15 May 2019, Deutsche Familienversicherung has also included animal health insurances in its offering. ProSiebenSat.1 Digital is responsible for marketing this insurance segment on far-reaching TV and online channels. In accordance with the 16-productmatrix developed by DFV, initially various tariffs are offered for the health insurance for dogs. The new products have already met with a very good reception from insurance customers. For the full-year 2019, the company has set itself a target of 6,000 new contracts
in this segment.

“After a strong start into the second quarter, we fully remain on track to achieve our annual targets communicated for the year and to continue our dynamic growth,” says Dr Stefan Knoll.

With 100,000 contracts in new business anticipated, the existing premiums for 2019 are to grow to EUR 100 million and gross premiums by around 20%. This takes into account the further optimization of the existing portfolio due to the planned run-off in the electronic insurance segment.

The result for 2019 will be affected by high growth investments in further extending the existing policies, expenditure on increasing digitization and the establishment and extension of new distribution channels. Accordingly, DFV anticipates a loss before taxes between EUR 9 and 11 million.

DFV Deutsche Familienversicherung AG (ISIN DE000A0KPM74) is a fast-growing insurtech company. As a digital insurance company, DFV covers the entire value chain with its own products. The aim of the company is to offer insurance products that people really need and understand immediately (“Simple & Sensible”). DFV offers its customers awardwinning supplementary health insurance (dental, health and long-term care insurance) as well as accident and property insurance policies. Based on its ultra-modern and scalable IT system developed in-house, the company is setting new standards in the insurance industry with consistently digital product designs and the option of taking out policies via digital language assistants.
www.deutsche-familienversicherung.de