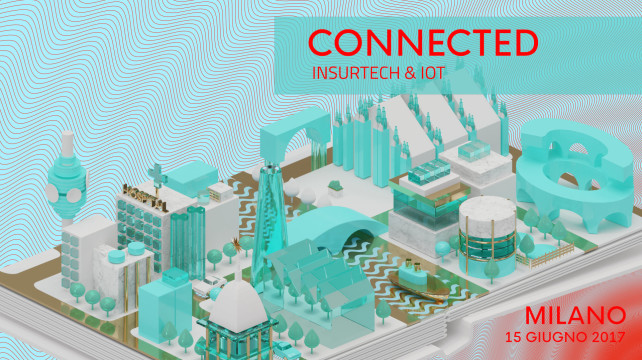 The “CONNECTED: Insurtech and IOT” event to be held in Milan on June 15th @ Microsoft House, will be centered around one of the most exciting topics of 2017: the evolution of the insurance world through new technologies like Artificial Intelligence, Social Networks, Augmented Reality and IoT.

Fluel, the organizer of the event, will bring together some of the biggest names in insurance technology alongside managers that have already been working “hands on” in insurtech, AR and IoT - related projects. The conference will be a great opportunity to allow networking and promote debate between important sector players.

The event is mainly destined for Strategic Decision Makers, IT, Marketing, Operations, Security or consultants that need to deepen their knowledge of insurtech and IoT. Among the speakers present at the event, AXA, Microsoft, Fintastico, Darwinsurance, Namu Insurtech, Neosurance and SPIXII.

While Darwinsurance, the first example of peer to peer insurance in Italy, aims at making insurance more social, cheaper and clearer by educating people to the social function of insurance carriers, the start-up Neosurance offers “on-the-spot” push micro policies in an intelligent way based on contextual data which it gathers on the single user - protection where and when it matters most on one’s smartphone. These two ambitious start-ups are part of the new wave of insurtechs that are beginning to emerge on the Italian market.

The impact of these new and important technologies will affect all players of the insurance sector but will not be limited to it. The event is going to tackle this subject from a business point of view and will try to analyze threats and opportunities that arise in actual business scenarios.

Gartner currently predicts some 8.4 billion connected things in 2017, to reach 20.4 billion Internet of Things (IoT) devices by 2020. Consumer devices are currently the majority with up to 5.2 billion units in 2017 (63 % of the total), while businesses are said to use 3.1 billion connected devices this year. Vehicles, smart TVs, and digital set-top boxes will be the main categories of smart devices used by consumers. Smart electric meters and commercial security cameras will be instead the top devices used by businesses.[1]

“I think trends in technology are born from single verticals which in time find overlapping and synergetic elements”, declared Salvatore Palange, organizer of the “Connected” event in Milan. Palange continues, “This is precisely the case of evolution in IOT – Internet of Things – allowing to improve many of the insurance processes through risk monitoring and prediction. In turn this has consequences on the pricing model of the big insurance companies which is why VC investments are mainly directed towards the IOT sector”.

According to CBInsights the third quarter of 2016 saw a spectacular round 1.5B$ of funding received by startups that focus on “wearables” and it is mainly due to the 800 M$ in funding collected by the startup «Magic Leap» followed by Jawbone, Thalmic Labs and Razer. Even though in 2015 the investment trend was temporarily slowed down, the recovery in 2016 has made up for the low amount of investments of the previous year.

The graph above by Venture Scanner highlights venture investing trends into the Internet of Things (IoT) sector, with data through April 2017. The IoT Software category clearly takes the lead in total funding with just over $4.5B. Instead the IoT Home category leads by number of startups (around 300).

In the meantime Insurtech startups are creating new businesses in 14 categories with a total funding up to date of 18Billion according to Venture Scanner data, with $417 million raised between January and March 2017.

Referring to the insurance sector in the classical way is becoming obsolete as more and more players are using “insurtech” when discussing insurance. Insurtech covers several technologies including AI, Social Networks and P2P applied to traditional insurance, to distribution processes or to the way in which customer engagement is dealt with.

Palange continues “I also believe that there is this one very exciting trend which is Augmented Reality (AR) and it will certainly trigger some changes in the way business handle the formation process of employees and real time monitoring. Just think of holograms that are perfectly integrated with our surroundings. Alongside AI, the potential of AR to influence businesses and the lives of people is clearly huge and with our “Connected” event in Milan we want to capture this great opportunity for exchanging ideas on where technology is now and where it’s heading in the insurance industry.”

Fluel has been organizing events related to innovation in technology since 2015 and they are continuously  searching for the latest disruptive trends that are affecting multiple industries in order to create high level networking moments among professionals.