To Each His Own: insurtech is no exception 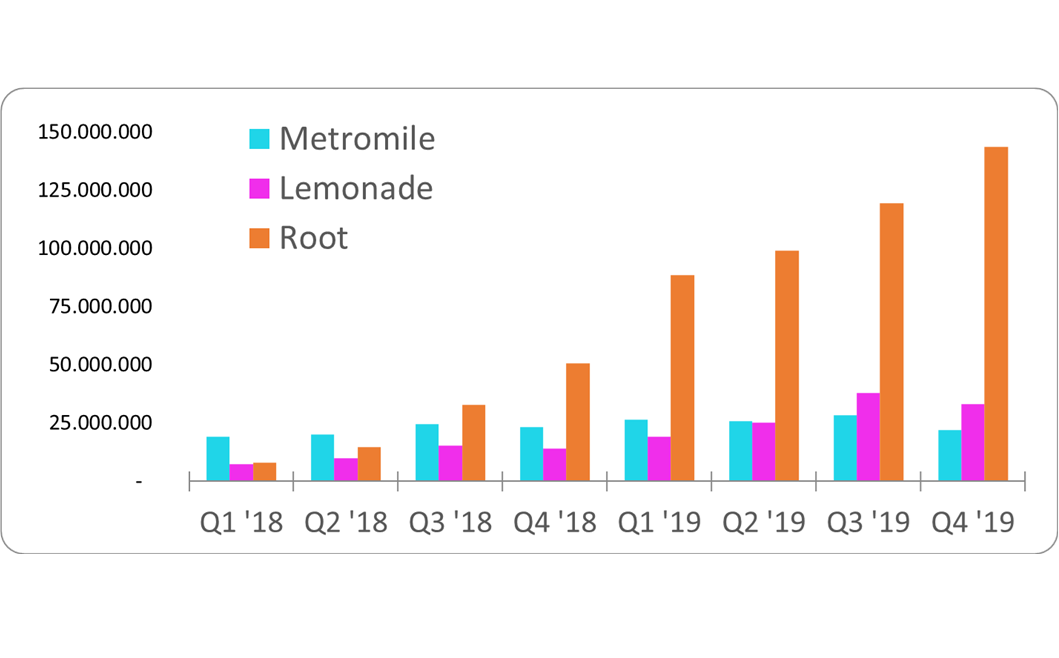 Since the first “Five Dispatches from InsurTech Survival Island”, Matteo has partnered with Adrian and in recent months with Sri, to analyze quarterly statutory statements of the most relevant US P&C full-stack InsurTech carriers. The principal goal has been to influence the dialog, debate and deliberations in the InsurTech space debate, and to promote a fact-based perspective to the discussion. Even as we continue to write about the future of insurance, about a year ago, Matteo declared his love for “old insurance KPIs” in this widely read article. While futurologists distanced from assessing P&L statements might disagree, many readers have liked the usage and explanation of insurance KPIs in the context of innovation. We are pleased to see more industry experts and authors join us in crunching numbers, assessing issues and taking a fact-based view on insurance innovation. We were especially pleased to see even some executives of InsurTech startups talk about core KPIs in the context of their innovative business models. So, we entered 2020 with a belief we had accomplished our mission to spark a P&L, fact-based dialog in the insurance innovation space.

Surprisingly, neither Q3 ‘19 nor Q4 ’19 financials got any attention from analysts, and some friends pinged us suggesting we continue the series for the foreseeable future. We hear you loud and clear, and we will continue to publish these digests based on assessing the fundamentals of the InsurTech players in the context of the broader insurance industry.  We are back!

Our journey continues here today. We are back with an analysis of the InsurTech trio’s financial performances, and to share our humble assessment of the competitive posture and advantage for these three innovative insurance start-ups. 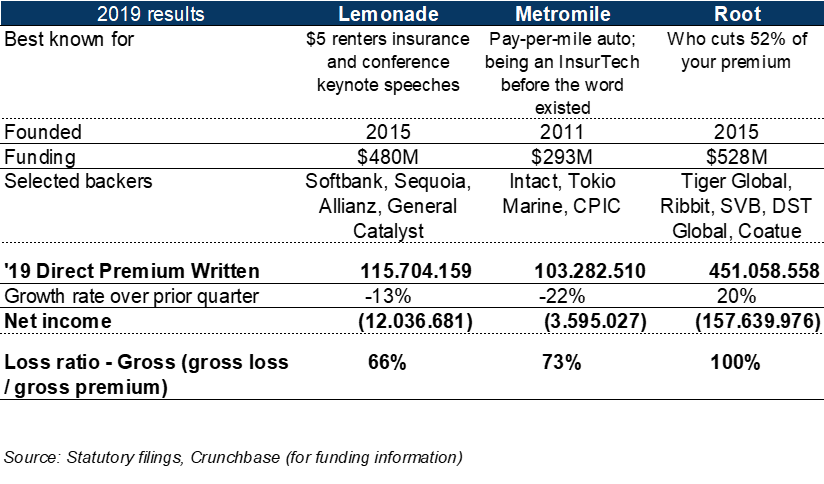 Let’s start as we typically do, with a look at the core financials. Frequent readers might recall our snapshot view that lists the core financial metrics for the three InsurTech players. As you read this summary, we would like to remind you again that we do not comment on the cost side of the equation and we suggest our readers not believe in them because of the “goals seek triumph” issue Matteo discusses in this article from last year.

“To each his own”. This phrase probably sums up best how we view the distinction between the three InsurTech players Lemonade, Root, and Metromile. We see the three players take three different paths to customer relevance and financial performance:

Let’s take a closer look at the loss ratios: 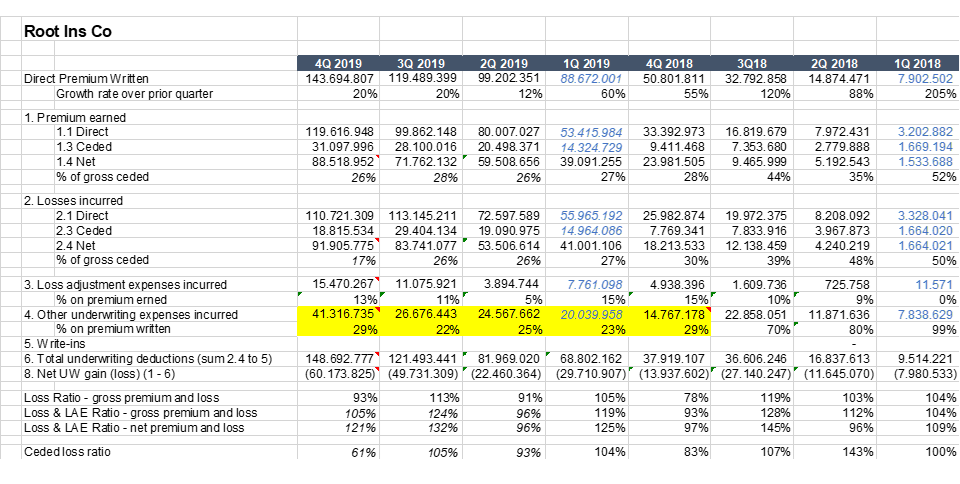 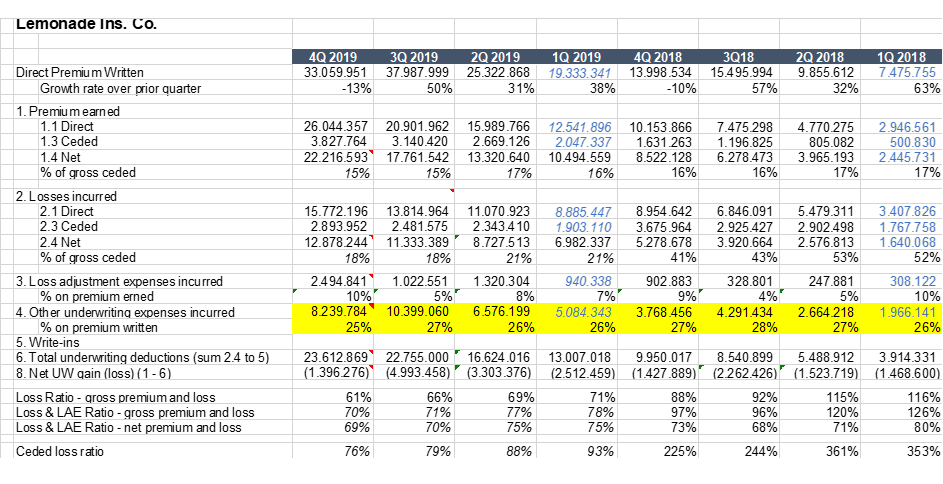 In the last article we highlighted the “pricing war”. So, let’s take a closer look at the top-line generated by these different approaches to the reach a sustainable loss ratio:

We are also not able to compare their real costs. As we discussed earlier, the companies are not reporting all of their costs in the yellow book anymore and therefore true cost positions cannot be judged. As an example, Metromile's stated underwriting expenses in the 4th quarter of the year went down, similar to movement we saw in the 4th quarter of 2017.

Let’s be frank. From these figures only Root is showing the trajectory expected for a startup in the growth phase. Even with gaps on the technical sustainability of their portfolio, they have a profitability improvement opportunity driven by better usage of telematics data. If the team builds mastery in usage of telematics data for behavior change and claims management, this venture could find the “root” for a sustainable growth. With this focus and strategy, they really wouldn’t need to invent anything fundamentally new and different. There are best practices on behavior change and claims management they can emulate from players like Allstate (USA) and Discovery Insure (South Africa), and UnipolSai and Groupama (Italy) respectively.

Continuing on the telematics topic, Metromile’s equity story seem less exciting. Customer appeal towards pay-per-use continues to be limited at best. Uncertainty of a fluctuating premium over the period of coverage is a barrier for the adoption. This model is attracting only customers who drive infrequently and focus on saving on their insurance premium costs.

The long tail of excitement with the disruption buzzword continues to characterize Lemonade’s march in this trio. The charity giveback - that has fascinated many commentators over the past years and Matteo described in detail in one past article with Steve Anderson - accounted at K632$ (1,3% of the 2018 premiums) last year and K162$ (1,8% of the 2017 premiums), i.e. a pretty inexpensive public relations and marketing tool. On a different note, their forward-looking plans to cross-sell and offer pet insurance appears to be a well thought out move that fits with the equity story for a start-up at their stage. Finally, their expansion into the German market generating K100€ premiums in 2019 appears to be another checkmark on the “to do list” of the “perfect startup”. Net-net, Lemonade’s story appears to excite industry commentators more than it excites customers!  On this note, there appears to be no sign of disruption in the homeowner insurance sector. Matteo has already earned the title of “cynic” from the Lemonade founder for a similar statement Matteo made a year ago.

Looking ahead now, what paths will each of these InsurTechs take, and how will they get there?   Will Covid-19 change everything?

Another question on everyone’s mind is probably this: What will be the impact of temporary lookdowns on the three players? As we look ahead into expected results from Q1-2020, we expect to see the effect of Covid-19 play out in a few different ways.

From a broader P&L perspective, we also expect to see Q1 ’20 investment income to be depressed.

Looking ahead to the rest of the year from his exile in a downtown Atlanta hotel, Matteo has already articulated his thoughts about futurologists who are designing a future based on their own self-image over the past few weeks (note: there have been tons of articles and webinars claiming that “nothing will be as before” and announcing the triumph of both digital distribution channels and pay-per-use telematics ). Matteo is skeptical about any long terms structural changes brought about by a few weeks of lockdown. Sri on the other hand believes that while the “target state” of consumer behavior and expectations may not be known for a while, the Covid-19 crisis will cause at least some segments of consumers to fundamentally rethink their risk management and insurance solution needs. He also expects changes in sectors like commercial real estate to push commercial insurance companies to rethink products, pricing and positioning in the commercial sector.

As we sign off this quarterly dispatch, many US states are currently reopening their economy – as European countries are progressively doing - We hope to be back soon to discussing insurance innovation on the stage of a big conference and to never have to comment again on the impact of a “lockdown”!