DFV Deutsche Familienversicherung AG: volume of new business up by 150% in H1 2019 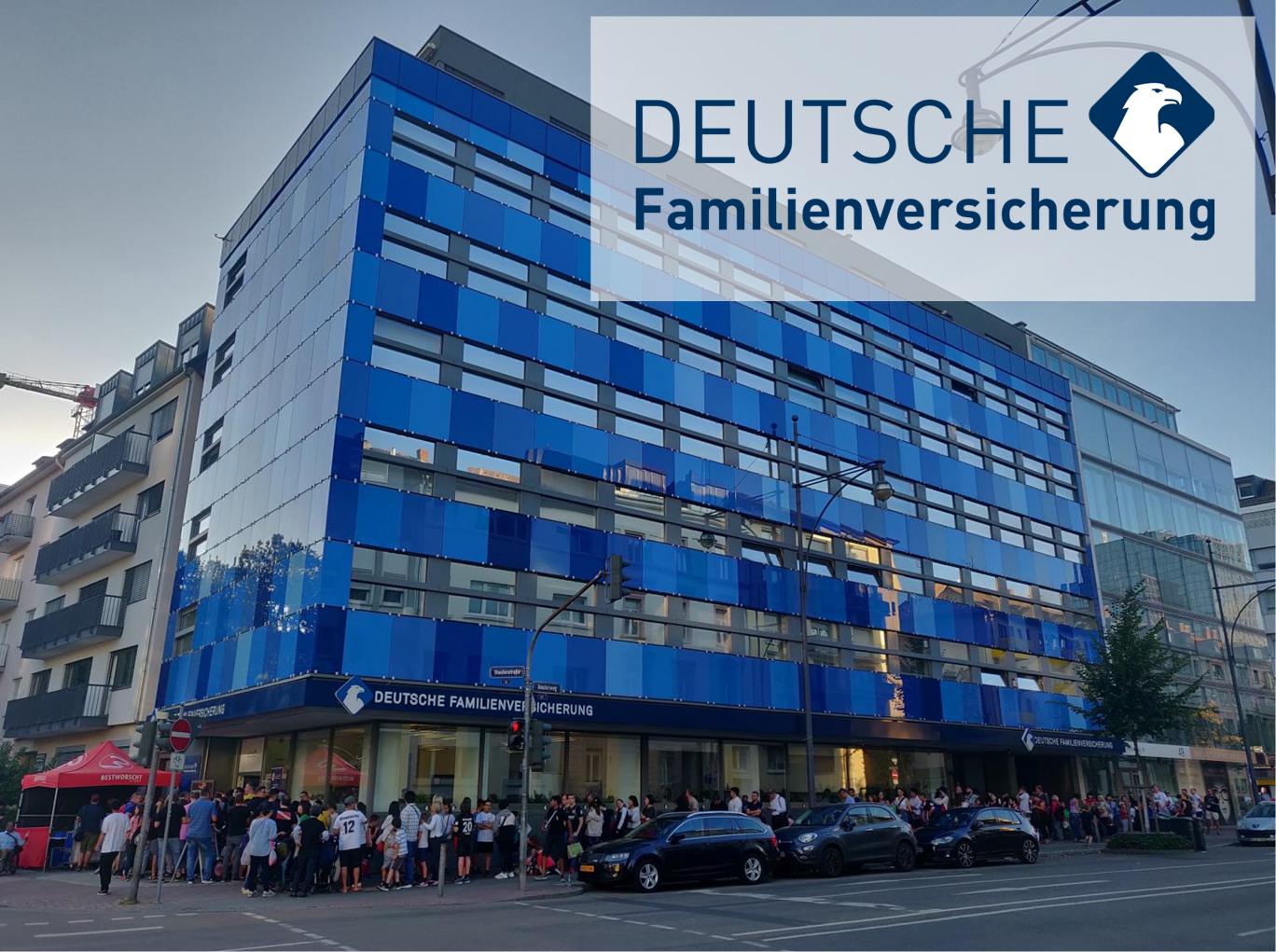 DFV Deutsche Familienversicherung AG (“DFV”, “Deutsche Familienversicherung”), a fast-growing and leading InsurTech enterprise in Europe, continued its dynamic growth in the first half of 2019. With 49,105 contracts written, the company’s new business more than doubled year-on-year (H1 2018: 23,111 new contracts). This growth was essentially due to its successful supplementary health insurance business, which expanded by 110.2% year-on-year, to 46,214 contracts written. In the property insurance segment, animal insurance policies successfully marketed since mid-May by ProSiebenSat1 Digital already made a significant contribution to the increase of 157.9%, to 2,891 contracts (H1 2018: 1,121 contracts). The company’s animal insurance offering confined to dogs at present met with a very good reception on the market. After the first six weeks, DFV already had over 1,000 new contracts with a premium volume of approx. 492 thousand euros on its books (status as of 30 June 2019).

The total newly generated premium volume rose by a disproportionately high 150.3%, to EUR 16.4 million (H1: EUR 6.5 million). In the supplementary health insurance segment, growth measured by the premium volume was up by 144.8%, and property insurance saw a 365.0% rise. Property insurance policies as at 30 June 2019 already accounted for 4.6% of new business within the premium volume and 5.9% in contractual unit numbers. This means that DFV is well on its way to reaching its self-imposed target of 10%. Owing to its successful market entry in the animal insurance segment for dogs, the company plans to extend its offering to include cats as of 1 October 2019.

Accordingly, at the end of H1 2019, DFV managed to increase its total underwriting portfolio by 6.6%, to approx. 485 thousand contracts (31 December 2018: approx. 455 thousand contracts). The reduction in the technical insurance (electronics) portfolio comprised approx. 7,000 contracts in the first half of 2019. As a result, the portfolio of policies in the company’s core business increased by roughly 9.3 %.

“The figures in new business written speak for themselves. Our distribution and marketing measures are effective and we are on the right track to reaching our self-imposed targets. We identified the enormous market potential for digital animal insurance policies in good time and succeeded in establishing ourselves as the absolute trailblazers on this market. This is further evidence of the high scalability of our business model. Even if the summer months will turn out to be slightly weaker due to seasonal factors, all signs are green as far as the attainment of our annual targets is concerned,” says Dr Stefan Knoll, Chairman of the Executive Board and founder of DFV.

Existing premiums as at 30 June 2019 increased by EUR 13.4 million or 17.7%, to reach EUR 89.0 million (31 December 2018: EUR 75.7 million). Gross premiums written rose by a substantial 38.6% in the first half of the year, to reach EUR 41.8 million A particularly strong contribution in this regard continues to be made by the supplementary health insurance business, up by 34.9%, to EUR 39.1 million. In the property insurance business, gross premiums written increased by as much as 128.2%, to EUR 2.7 million. This reflects the positive contribution made by our new product segment, namely animal insurance policies.

Due to increased distribution expenditure in order to stimulate growth in the first half of 2019, the combined ratio (of claims to expenses) increased to 110.5% (H1: 78.1%). In contrast, the claims ratio largely remained stable at 60.5% (compared to 58.6% in the same period a year earlier). 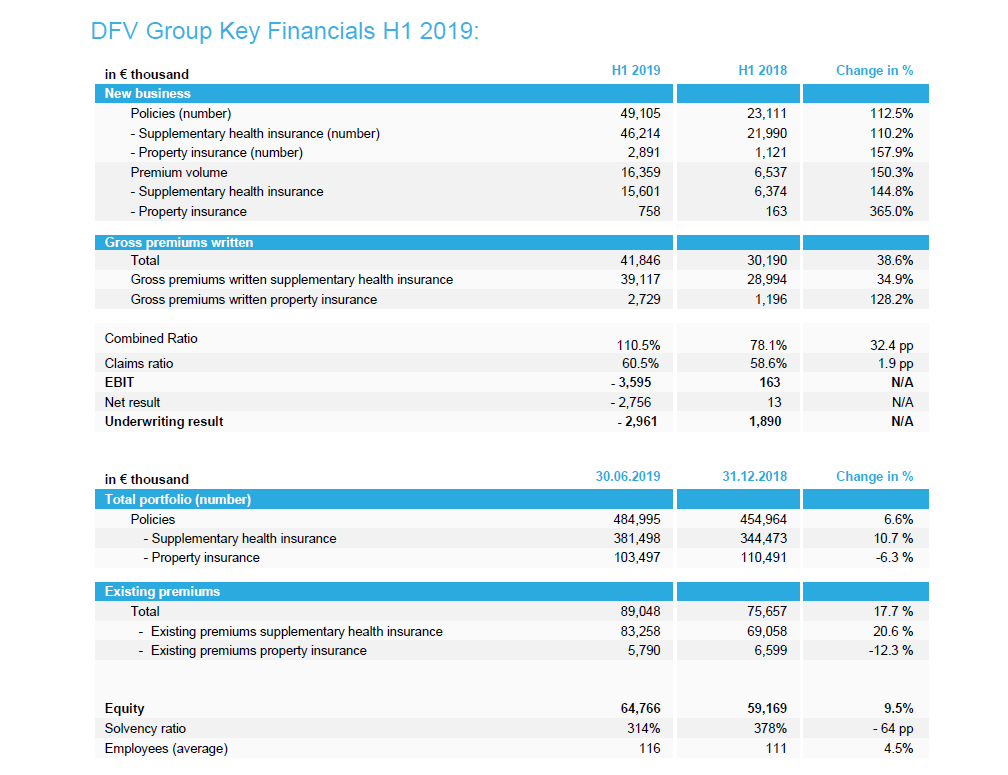 The sharp rise in new business was accompanied by a substantial increase in distribution costs, which rose by 260.4%, to EUR 15.6 million. EBIT declined to ‑EUR 3.6 million as expected (H1 2018: EUR 0.16 million). This includes a positive non-recurring effect amounting to EUR 0.9 million due to profits realised as part of the capital investment due to the recovery of the global capital investment markets in the first half of 2019. The underwriting result accordingly amounted to -EUR 2.9 million (H1 2018: +EUR 1.9 million). The result after taxes came to -EUR 2.8 million in the first half of 2019 (H1 2018: +EUR 0.01 million).

The solvency ratio of Deutsche Familienversicherung declined to 314% in the first half of 2019 (31 December 2018: 496%). This reflects the increased level of capital deployed to achieve this significant business growth. At 314%, the quota continues to exceed the regulatory requirements significantly, remaining at a very solid level.

Deutsche Familienversicherung is very confident that it will achieve its targets: with new business estimated at 100,000 contracts, the existing premiums in the year 2019 as a whole are to reach EUR 100 million, with gross premiums written rising by approx. 20%. The further optimization of the existing portfolio due to the planned run-off in the electronic insurance segment has been taken into account in this regard.

The operating result for 2019 will be affected by high growth investments in further extending the contract portfolio, expenditure on increasing digitization and the establishment and extension of new distribution channels. Accordingly, DFV continues to anticipate a pre-tax loss of EUR 9 to 11 million.

DFV Deutsche Familienversicherung AG (ISIN DE000A0KPM74) is a fast-growing insurtech company. As a digital insurance company, DFV covers the entire value chain with its own products. The aim of the company is to offer insurance products that people really need and understand immediately (“Simple & Sensible”). DFV offers its customers award-winning supplementary health insurance (dental, health and long-term care insurance) as well as accident and property insurance policies. Based on its ultra-modern and scalable IT system developed in-house, the company is setting new standards in the insurance industry with consistently digital product designs and the option of taking out policies via digital language assistants.