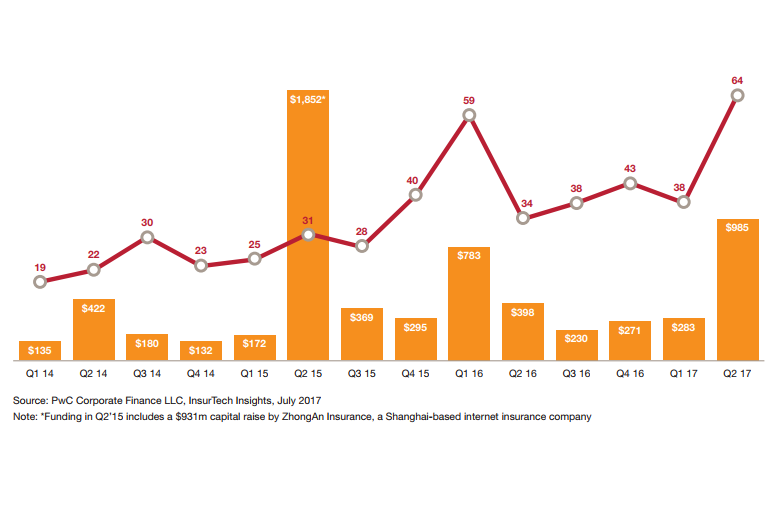 Here we are celebrating two years of InsurTechNews and what better way to do this than giving you a quick update on the state of the industry and on our website metrics.

It’s been one exciting year under the sign of insurtech influencers. We’ve been publishing the #50insurtech online influencer list for 16 months now with more than 150 folks featured in it. You can follow their thoughts by simply subscribing to our twitter list: Top #50insurTech

This has brought about some great award moments created together with Insurance Nexus for their London-based and US-based events. We were in Chicago at Insurance IoT USA in December 2016 to give the InsurTech IoT Leader Award to Sylvain Theveniaud from Allianz Accelerator. In June 2017 we worked together with Insurance Nexus for the Insurance IoT Europe Summit offering a total of 4 awards ranging from the IoT Partnership Award and Insurer in IoT Award to the Insurance Nexus InsurTech IoT Newcomer Award and IoT Vendor Innovation Award. We appreciate the great feedback we’ve received from insurtech thought leaders all around the world and we’re grateful for those promoting our #50insurtech list on their social media profiles.

Since the begining of 2017 we’ve been able to offer a quarterly update based on data provided by Venture Scanner on the state of the insurtech sector, so stay tuned for the next updated coming up soon. In the mean time, looking at previous data we can see that insurers, reinsurers and venture capital firms invested $985m (£735m) between April and June, with a total of $1.26bn up to date[1]. The recent report by pwc shows the evolution of worldwide InsurTech investment since 2014. The spike in 2017’s second quarter is expected to continue until the end of the year, surpassing previous quarters.

Participants in the Global FinTech Report 2017 by pwc indicated that 45% of them currently partner with Insurtechs while 94% of respondents are better prioritizing risk insights and customer engagement.

During this year insurtechnews was present at several major insurtech events around the globe. The common nominator of these events were that participants and speakers alike were very much focused on understanding ways in which insurers can stay relevant and succeeded in the new hyper connected world.

Discussing #insurance in the age of the connected generation, keynote speech by Matteo Carbone

A quick look at how we did since our last InsurTechNews anniversary. We had a 265% growth in number of usersbetween Oct 1st 2016 and Oct 1st 2017 compared to the previous one year period. 128K users, 210K sessions and 330K pageviews in total this last year.Since the launch of the website we’ve seen a relatively steady growth pattern as reflected in the image below.

Monthly users between October 2015 and August 2017

We’ve seen a 180% increase in number of newsletter subscribers since October 2016 and we currently have a 5% click through rate for our weekly newsletter. If you’re not subscribed yet don’t miss out on another newsletter and insert your email in the box on top of this page.

Our website readers come from all corners of the globe. The US is leading the way with 23% but the UK is also close with 14,9% followed by Italy third with 6,5% and Germany with 4,7%.

Last but not least, the insurtechnews Twitter profile has now reached almost 14.500 users with a steady 156K impressions per month. So make sure you’re following us on twitter @insurtechnews to stay updated with the latest news!